President Obama is continuing developmental work on the controversial Strategic Defense Initiative ("Star Wars") plan begun in 1983 by President Reagan, and quietly pushed by each of Reagan’s successors, a distinguished geopolitical analyst warns. 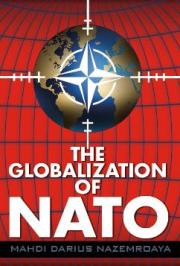 President George W. Bush executed "the first phase of establishing the ground-based components of this system," writes Mahdi Darius Nazemroaya in his new book The Globalization of NATO, published by Clarity Press, Atlanta. "Under the Obama Administration," the Canadian sociologist adds, "this work is continuing and branching out globally on land and at sea."

The "Star Wars" scheme, broadly denounced in Reagan’s day as both illegal and a costly failure, was advertised as a "defensive" global missile shield based on the ground, at sea and in space. However, there is nothing to stop the Pentagon from using space components of the missile shield to shoot at other things besides missiles, the author points out.

Violating the 1967 Outer Space Treaty and the 1972 Anti-Ballistic Missile (ABM) Treaty, the missile shield, Nazemroaya writes, "will make the world much more unstable by creating an arms race." He says if the Russians and their allies did not feel threatened "they would not draw the lines in the sand that they have. Nor should it be forgotten that the door has been opened wide for the internationally illegal use of space for military applications."

"The Kremlin regards the missile shield project as a serious threat to its national security," Nazemroaya writes, claiming it is a pretext to encircle and neutralize Russia, part of the U.S. military doctrine of full spectrum dominance, "a revamped nuclear first strike policy that now includes the concept of nuclear primacy, and NATO expansion onto the borders of Russia---despite NATO’s guarantees that it would not expand beyond the borders of Germany."

Prior to assuming his role as Defense Secretary under George W. Bush, Donald Rumsfeld headed the Commission to Assess United States National Security Space Management and Organization, frequently called the Rumsfeld Space Commission. "The commission’s report, issued on Jan. 11, 2001, warned ("absurdly," the author writes), that the U.S. is threatened by a "Space Pearl Harbor" and thus called for the U.S. to militarize space as a means of "projecting power" around the globe.

"Having this capability," the Report said, "would give (Washington) a much stronger deterrent and, in a conflict, an extraordinary military advantage."

This "extraordinary military advantage," Nazemroaya writes, "is the basis for the global missile shield, which is part and parcel of the militarization of space." He goes on to say, "The ultimate objective is to establish full spectrum dominance by the U.S. over all other countries."

The announcement in 2009 by President Obama that he was scrapping U.S. missile defense plans for Eastern Europe was nothing more than "a public relations stunt," the author writes, as Obama was launching a "more extensive and effective" scheme "under revised plans that will include naval deployments on board Aegis-equipped ships." (This system allows warships to shoot down enemy missiles.)

"The deployment of the missile shield has actually been expanded inside and outside Europe by Obama, from Turkey to Spain and from the Mediterranean Sea to the Baltic Sea," Nazemroaya writes. He points out the U.S. offensive rests, in fact, on a triad of three shields based in Europe, the Middle East and East Asia which essentially surround Eurasia.

While Iran has been cited as a justification for the European shield, the location of military facilities in Greenland reveals an effort to monitor Russian missiles that might be fired over the polar regions toward America, not Iranian ones.

"By its nature," Nazemroaya writes, "the project is offensive and a strategic step to end any military balance between the U.S. camp and the major Eurasian powers. This new iron curtain, however, goes far beyond dividing Europe. Eurasia is being marked; a military "ring of fire’ is being established around Russia, China, Iran, and their allies." It is a fact, he adds, that "the Russian Federation is being simultaneously encircled by NATO, a growing number of military bases, and finally by U.S. and NATO missiles."

"In the eyes of Russia," he explains, "the missile shield project is an attempt by the U.S. to establish nuclear primacy by neutralizing any Russian nuclear response and thereby Russia’s capabilities to defend itself and it allies. With the missile shield in place Russia would become unable to react to a nuclear first strike by the United States" and "The Kremlin’s nuclear arsenal would virtually become useless because of the missile shield on its borders."

"Russian hostility towards the U.S. missile shield project is based on an understanding of U.S. strategic goals...(including) the military doctrine of full spectrum dominance, a revamped nuclear first strike policy that now includes the concept of nuclear primacy, and NATO expansion onto the borders of Russia---despite NATO’s guarantees that it would not expand beyond the borders of Germany," Nazemroaya pointed out.

Moscow feels threatened, he adds, by the offensive military characteristics that NATO has adopted since the end of the Cold War, "which has taken NATO from intervention in the former Yugoslavia to fighting in Afghanistan and Libya, and both security and training missions in the Middle East and Africa."

Sherwood Ross is an independent reporter, radio commentator, and publicist for good causes, including Clarity Press, of Atlanta, publishers of the NATO book. He worked as a reporter for the Chicago Daily News and contributed a regular "Workplace" column for Reuters. He has contributed to national magazines and hosted a talk show on WOL, Washington, D.C. In the Sixties he was active as public relations director for a major civil rights organization.